Figure 1 A map of Russia and Ukraine.

Ukraine became independent in 1991 following the collapse of the Soviet Union. The current power struggle between Russia and Ukraine began in 2014 following the Russian annexation of Crimea from Ukraine. Tensions continued to escalate and are now at what seems to be a breaking point.

At present, Russia opposes Ukrainian involvement with NATO, seeking to prevent NATO’s influence in the region. Regional analysts report it is unlikely NATO allies will expand their military influence in the region, which could further jeopardize their relationship with Russia. However, Ukraine has held joint military exercises with NATO forces in the past, and NATO countries have stated they are ready to step in and assist Ukraine if a Russian invasion occurs.

Russia reportedly has more than double the military manpower of Ukraine and has around 100,000 troops currently stationed along the Ukraine border. At present, the US reportedly has 8500 troops on standby to deploy to Eastern Europe, with nearly  3000 on the way;  and NATO has sent ships and aircraft to the region. There have been reports of potential sanctions against Russia and imposing export controls for dual-use technology. Additionally, NATO countries may attempt to exclude Russia from the global SWIFT financial system, which could lead to a short-term inconvenience for Russia and a massive blowback to the US.

A spokesperson for Russian President Putin alleged the US is escalating tensions, and Putin reportedly accused the US of using Ukraine as a pawn against Russia without caring about Ukraine’s interests. A majority of the Russian people reportedly want peaceful relations with Ukraine. Meanwhile, the Biden administration accuses Putin of being the aggressor. At this time, Russia denies plans to invade Ukraine.

Russia and Ukraine have a history of state-sponsored cyber conflict. Russia was observed targeting Ukrainian systems in 2013 with Operation Armageddon, but the activity potentially began as early as 2005. In 2014, aligning with the Russian troop movement into Crimea, Ukraine’s fiber optic cables were tampered with. Websites were targeted with DDoS attacks, and the mobile phones of several Ukrainian politicians were hacked or jammed. This marked the beginning of Ukraine’s cyberwar with Russia.

In 2015 and again in 2016, Russia reportedly hacked Ukraine’s power grid. In 2017, Russian threat actors carried out a supply chain attack on Ukrainian assets using Petya malware. According to CrowdStrike, most of Russia’s cyber attacks targeting Ukraine have been linked to the state-sponsored threat actor dubbed Voodoo Bear. A recent post by Symantec profiled ongoing espionage operations against Ukraine by a Russian nexus threat actor group known as Shuckworm (Armageddon) and traced the activity back to the 2013 Operation Armageddon. PolySwarm has multiple Shuckworm campaign samples available. IOCs are listed at the end of this document.

In mid-January 2022, over 70 Ukrainian government sites were defaced or disabled. The defacement message was written in Polish, Russian, and Ukrainian, with a political message crafted to create dissent among the ethnic groups. The Ukrainian Cyber Police and Ukrainian Security Service suspect the threat actors responsible for the defacements used multiple attack vectors, including leveraging the infamous Log4j vulnerability. 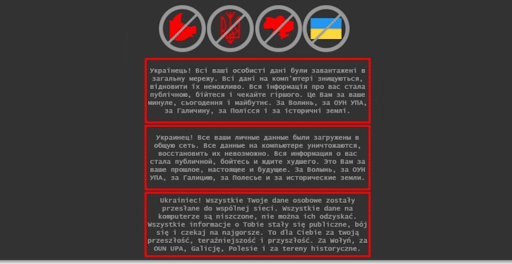 Additionally, the Ukrainian government, non-profit, and technology systems were targeted using a three-stage MBR wiper masquerading as ransomware and dubbed WhisperGate. The malware displayed a ransom note demanding payment to a Bitcoin address prior to wiping the master boot record. The Ukrainian government formally accused Russia of being behind the attacks. While no definitive attribution has been made, industry analysts note the possibility of threat actor involvement originating in Belarus, a close ally of Russia. Ukrainian officials suspect involvement by a Belarusian threat actor group known as Ghostwriter/UNC1151. PolySwarm has multiple WhisperGate samples available. IOCs are listed at the end of this document. 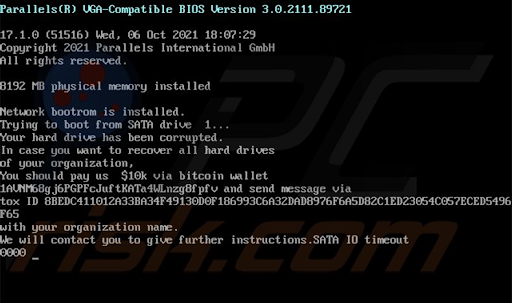 Figure 3 A screenshot of the ransom note used by WhisperGate malware.
Credit: PCRisk

On January 24, the hacktivist group Belarusian Cyber Partisans claimed to attack Belarus Railway using ransomware. Their motivation was two-fold 1) to protest the railway’s plans to transport Russian troops and equipment that could be used to attack Ukraine and 2) to demand the release of 50 “political prisoners” in exchange for unlocking the railway’s systems. The group accessed the railway’s control systems, giving them the ability to shut down the railway’s signal systems, which could lead to collisions. However, Belarusian Cyber Partisans chose not to take such actions. The group tweeted what appears to be proof of the hack in the form of stolen documents. Emsisoft stated this incident appears to be the first time hacktivists have leveraged ransomware in pursuit of political objectives. 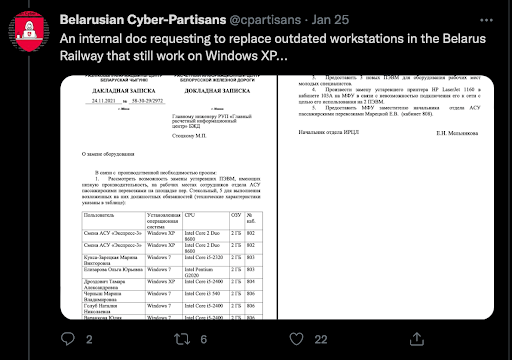 Figure 4 A tweet by the hacktivist group Belarusian Cyber Partisans that appears to show a stolen document.

Both state-sponsored cyber operations carried out in support of kinetic warfare and hacktivist activity could have a wide range of real-world impact, including but not limited to: While the true likelihood of this is currently unknown, any cyber tensions arising from the current conflict could serve as a precedent for future cyber warfare in the modern era. Despite Russia’s past targeting of Ukrainian systems, based on reporting, more recent attacks on Ukrainian assets appear to originate in Belarus. The existence of collaboration or a relationship between Russian and Belarusian cyber threat actors is currently unknown. Ukraine and NATO countries should also be on the alert for false flag attacks carried out by hacktivists or state-sponsored threat actors from other countries, taking advantage of the conflict and masquerading as Russian threat actors.